Polarity is a fundamental feature of cells and can manifest itself both in overall morphology and in the unequal distribution of molecular components. Cell polarity, in both animals and plants, is of paramount importance for many developmental and physiological processes. Establishment and maintenance of cell polarity is required for asymmetric cell division (ACD), an indispensable mechanism for multi-cellular organisms to generate cellular diversity by producing daughter cells with distinctive identities from a single mother cell. Extensive studies in animal systems have revealed a set of conserved proteins that link cell polarization to asymmetric division control. Plant genomes do not seem to encode these "polarity" proteins and the molecular components and mechanical basis for plant asymmetric division has been an enigma for decades. Studies on the novel plant protein BASL (Breaking of Asymmetry in the Stomatal Lineage) provided the strong evidence that plant cells also have the capability to polarize non-transmembrane proteins and utilize polarized protein distribution to regulate asymmetric cell division (Dong, et al., 2009)(figure 1). 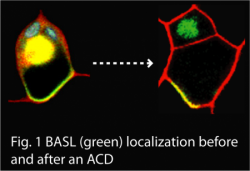 The formation and patterning of stomata (pores on the plant epidermis that regulate CO2 and H2O exchange with the atmosphere) proceeds via a series of asymmetric divisions. These divisions are required for cell fate specification, stem cell-like renewing divisions, and overall patterning. BASL was first demonstrated to regulate asymmetric cell divisions by its mutant phenotype; BASL's striking sub-cellular polarization in the stomatal lineage cells (figure 1), however, was key data that suggested a molecular mechanism for the creation of plant cell polarity. By using BASL as an anchor for genetic and physical interactors screens, and by using features of the protein itself as a probe for cell's ability to correctly establish polar cortical localization, my lab is interested in building a model for plant cell polarity and its regulation in ACD. This includes the identification of additional polarized proteins and of mutants that highlight specific subsets of polarity defects. In the future, my lab will continue to use Arabidopsis as a model system, by studying BASL and the other newly identified factors, to investigate how proteins become polarly localized, how polarity proteins are involved in establishment of cellular asymmetry, and how cell polarity is instructive of cell fate and differentiation in plants.