The research conducted in our laboratory focuses on biological and physical organic chemistry. In the biological chemistry area, the reactivity of nucleobases and nucleotides, including enzymes for which nucleic acids are substrates, is explored using methods such as mass spectrometry (MS) and computer modeling. Goals of this research include the improved understanding of DNA reactivity and enzyme catalysis toward the ultimate end of improved drug design. In the physical organic area, synthesis, MS, and theoretical methods are used to explore pericyclic rearrangements. Goals include identifying the root of acceleration in various reactions, toward the end of increasing the synthetic utility of these rearrangements. 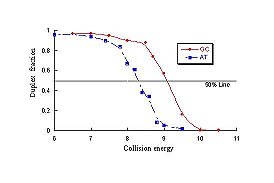 The factors, including hydrogen bonding, pi-pi stacking and solvation, which control the stability of duplex DNA are under investigation. State-of-the-art experimental techniques, including electrospray ionization, liquid chromatography mass spectrometry (LCMS) and Fourier transform mass spectrometry (FTMS), are used to explore the binding affinities of DNA double-stranded oligomers in the gas phase, in the absence of solvent. Because solvation plays a role in stabilizing the double helix, from affecting base pairing to mediating binding events, the study of naked DNA to examine intrinsic behavior is of fundamental importance. Our overall goal is twofold: 1) to undertake the systematic examination of DNA base pairs, base-stacked dimers, and longer oligonucleotides in order to lend insight into the intrinsic stability and behavior in the absence of solvent; and 2) to establish a novel method for the rapid assay of gas-phase and solution-phase binding affinities using mass spectrometry. Since biological processes are regulated, fundamentally, through specific DNA-protein recognition, and DNA protein recognition is controlled by DNA conformation, the study of duplex DNA structure and stability is highly significant. 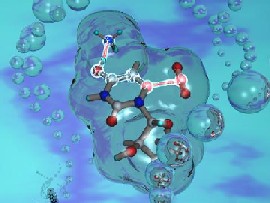 The mechanisms by which enzymes catalyze reactions are of interest from a purely scientific, physical organic perspective, but also from an applied point of view: understanding an enzyme mechanism has implications for inhibitor design and potentially rational drug design. Two nucleotide-related reactions that are particularly suitable for directed computational and gas-phase experimental studies are the decarboxylation of orotidine 5-monophosphate (OMP) and the cleavage of an erroneously inserted uracil in DNA. The decarboxylation of OMP is catalyzed by a highly proficient enzyme. OMP decarboxylase; the mechanism remains unknown. Computational and experimental studies are used to uncover the mechanisms by which the enzyme can effect catalysis. Uracil-DNA glycosylases cleave the uracil-ribose bond in DNA (where a deoxyuridine has been erroneously inserted). The study of the mechanism can be reduced to a question of the acidity of uracil. The effects of protonation and nearby cations on uracil acidity are currently being explored computationally, while the gas-phase acidity of uracil is being examined experimentally. 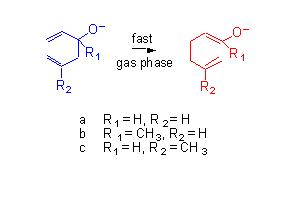 The effect of media on reactivity is a classic concern for organic chemists. Whether one is considering the solvent in which to conduct a reaction, or the effect of a low dielectric interior in an enzyme active site, the medium has profound effects on reactivity and binding. The elimination and decarboxylation reactions of benzisoxazoles and 3-carboxybenzisoxazoles are extremely medium-sensitive and occur more rapidly in aprotic solvents. A combined experimental and theoretical investigation is being undertaken to explore these reactions in the gas phase and with individual-molecule solvation in order to understand how solvation and biological catalysis affect reaction energetics and transition structures. Medium also plays a role in the rearrangements of anionic Cope substrates. Anion-accelerated Cope rearrangements, of which the anionic oxy-Cope is the most well-known, are predicted to proceed very rapidly in the gas phase. Probe reagents are used that can differentiate between the starting material and product, which have the same m/z ratio, in order to discern whether rearrangement has occurred. Theory is utilized to explore transition structures and to lend insight into how and why these reactions experience such great acceleration.